To react and solve the conflict between children or to let them face the problem on their own? Where is the line between promoting children’s autonomy and maintaining order and harmony in the group? Joanna, an ECE professional from a public crèche in Łódź, Poland, shares her experiences and reflection on this dilemma.

After the snack, it’s time to “take a breath” during casual games. It might seem so, but nothing could be more wrong… A dozen children in the room, and I try to catch sight of each of them separately and together. My colleague is sitting with four children by the puzzles, so my attention starts to focus on the opposite part of the room.

The children are busy playing with each other; they are constantly in motion, next to each other, and yet each one of them creates their own story by walking or jumping around the room, moving toys from one place to another…

Lila comes up to me and asks, “Auntie, make me a crown!”, showing me the blocks from which such headgear is very often made. And I can’t watch the rest of the children with all the attention they need. I look at the room… all right, I will make a ‘crown’… – “Auntie! It doesn’t fit here.” – Bartek comes with a jigsaw puzzle and puzzle elements. – “We’ll be right back.” – I say and ask Bartek which element he means, and I ask him to show it to me. When he does that, the wooden giraffe actually jumps into its place in the puzzle by itself. As I attach the blocks to the ‘crown’ and watch Bartek walk away, I shudder at the sound of the wooden blocks being scattered right next to me. Kuba, the creator of this ‘scattering’, sits on the carpet and starts stacking them. From time to time I pass him some bricks, and he adds them to his building and smiles at me. And I also smile at him myself – it is somehow contagious…

I look around the room again – it seems that everything is still okay. And yet… it just seemed to me. Before my eyes, there’s a scene like many others that can be seen in a crèche. Tim pulls the car out of Tom’s hand, and he doesn’t give it up. For a while everyone pulls the toy in their own direction. Tension is growing, emotions and screams appear. What shall I do? Get up, or wait? I’ll let my friend know that she should wait… Or maybe get up and settle the dispute… but who can I give the car to? I didn’t even notice who was playing with it first. One of the children may feel unjustly treated, and besides, I won’t give them a chance to resolve the conflict on their own… which will probably not happen again. The atmosphere is getting more and more tense, I can hardly help intervening when… Tymek wins – he’s stronger because of his posture. Tom sits empty-handed on the carpet and cries. Tymek runs away to the other end of the room completely satisfied and throws the car on the floor. So, what should we do here? Make the crying person happy, or pay attention to the happy Tymek? Or maybe do nothing… There is not much time to think about it and I haven’t even come up with a decision yet… because Włodek runs up to pick up the car and brings it to Tom, who is happy to forget about crying. I look at Tymek walking around the hall, who has heard many times not to take toys away from the children. I thought to myself that he knows this perfectly well and does not feel comfortable with it at all. There is no point in reminding him about it again, after all, he would focus his attention on this very behaviour anew, and I don’t want him to. So I resign, although I am still thinking a little bit about my inner “compulsion”, which necessarily wants to draw his attention. I think that maybe it’s worth stopping sometimes, and that this moment is a great opportunity to do so… we’ll see what comes out of it… if not for Tymek, then maybe for me? 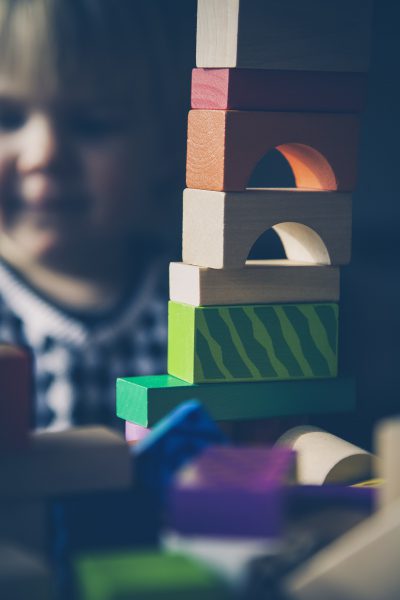 There have been various changes in the room during this time. A group of children were just playing with puzzles, while other children were pulling out paper bricks from the cupboard, starting to build a tower with them. The tower was growing in size and falling as fast as it was being built – making the children laugh, and more and more of them joined in to play. This did not escape the attention of Tymek, who began to bring the bricks himself. Sometimes, we asked him like other children: “Can you bring the others?”, indicating the place in the room, and it was no problem for him. The common goal was to make the game without conflicts, even for Tymek. And even if it was just a single moment when he forgot about taking toys away from other children and focused on building, it was an extremely important moment for him.

And for me, this was a moment to take a breath… After all, I didn’t even manage to change the place where I was sitting, and in my hands not one, but a few ‘crowns’ were made, I saw how the puzzles found their missing elements, how pictures, a castle and a tower were made. A tower which was higher than the tallest boy in the group, and even a fountain of tears was stopped – and in fact, I didn’t do anything… I just was there. I felt as if I had at least finished my exams in college – this was just an ordinary hour in the setting… I also think more often about Tymek and almost tangibly see that there is less emotion in me and more understanding and peace of mind in contact with him… it was worth stopping even if it was only that moment.

It is only in our “non-action” that we have time and space for such reflection, which directs us to give the child the opportunity to be independent. Only our “non-action” gives the child the opportunity to act – and thus to develop himself or herself based on the strong foundations of his or her sense of self-activity. It is thanks to this that we will build in the child such a sense of self-esteem that he/she will not need our support, because he/she will find support in him/herself, if not now, then in a month, two, a year, several years…. That’s what we’re here for, that’s what I’m here for – TO ACT AND NOT TO ACT… with the right connection between them. Towards professionalism and creating a space for the child, in which the child can “act” – if this space is first built in us… in ourselves, us – educators, us – parents!

The text is an excerpt from Joanna’s speech at the National Seminar Accompanying a Child in Development; VI Meeting in Łódź, Theme: The teacher of a small child – towards professionalism. The event was co-organized by the BECERID researchers from Poland.