This blog post was contributed by Nadine Correia (ISCTE-IUL).

Hitting adults is called assault. Hitting animals is called cruelty. Hitting children is for their own good? This was the motto of a Council of Europe’s campaign, launched in 2008 with the objective of raising awareness for the abolition of corporal punishment against children. In this message, we share some myths and truths about corporal punishment, hoping that you can also share your perspectives on this subject with us.

Myths and facts about corporal punishment 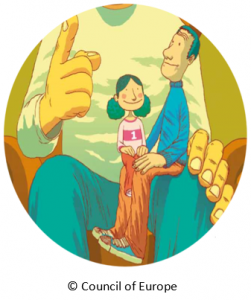 MYTH 1: A slap, from time to time, does not hurt anyone. My parents also hit me when I was a child, and there was no harm. Truth be told, without that, I would have become a spoiled and rude child.

FACTS: Corporal punishment is considered one of the most common forms of violence against children, by which physical force is used to cause some pain or discomfort, but not injuries, and as a way of correcting or controlling inadequate behaviours [1]. It often involves some form of humiliation, threat, or mocking [2]. There are no known benefits of corporal punishment [3, 4]. On the contrary, several studies suggest that corporal punishment can cause physical and psychological damage to children, compromising their healthy development [5]. In addition, these practices tend to be perpetuated through generations [6].

REFLECTION PROPOSAL: How can we replace corporal punishment with more positive ways of influencing children’s behaviour? With an environment free of punishments, with positive and regular attention, showing interest for children’s perspectives and experiences, and trying to understand their points of view, weren’t we in a better position to provide them with the tools needed to see the others’ point of view, being able to solve conflicts? 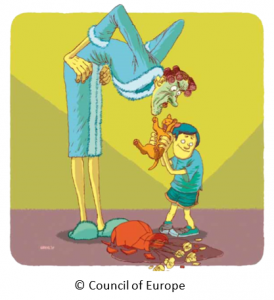 MYTH 2: There is a huge difference between hitting a child and spanking for his/her own good. Sometimes, a slap, or pulling the child’s arm, at the right time, prevents a child from getting hurt, or from misbehaving.

FACTS: Corporal punishment is a violation of children’s rights, regardless of the form, intensity or frequency with which it is applied [2]. Thus, both the slightest forms, such as slapping, and the most extreme, such as pulling children by the hair, or punishing with the use of objects, are aggressions that threaten children’s well-being. Corporal punishment does not serve to protect children. On the contrary, it is an ineffective strategy to promote appropriate behaviours, which sends the wrong message to children, that through corporal violence we can solve problems and conflicts [2].

REFLECTION PROPOSAL: How many times did we stop to breathe, to avoid losing control, and leaving the discussion of a less severe misbehaviour for later? How often do we reinforce children’s competence, self-control, and capacity to influence what surrounds them? Grabbing the child, holding him/her, showing the damage his/her behaviour caused, what could have happened, or the danger he/she could run… isn´t it more pedagogical and effective, than hitting the child so he/she doesn’t do it again?

MYTH 3: Each person knows how to educate a child, acting in the way that seems most correct. If corporal punishment was criminalized, how many people would be condemned? There are even religions that impose the use of physical punishment!

FACTS: There are several institutions seeking to regulate aspects related to violence, so that violence against children is not legitimate. Since 1985, the Council of Europe condemns corporal punishment and proposes its ban, through several recommendations. Currently, most of Council of Europe member-states have abolished corporal punishment in all contexts, including school and family. Also, Article 19 of the Convention on the Rights of the Child (CRC) [7] is explicit about the need to protect children from any form of violence. Thus, religious freedom should not override human rights, as expressed by the Committee on the Rights of the Child [8]. Relatedly, several religious leaders have approved a commitment to combat violence and corporal punishment against children [2].

REFLECTION PROPOSAL: Positive education and positive parenting, alternatives to corporal punishment, propose the use of strategies based on relationships built on mutual trust and respect, contributing for children’s healthy development. As early childhood education (ECE) professionals, parents, policymakers, or other professionals linked to ECE, what responsibility do we have, how can we raise awareness, and should we act? Raise your hand against corporal punishment, as illustrated in the video that follows: