This blog post was contributed by Katarzyna Gajek, PhD, (University of Lodz, Poland)

ECEC professionals’ understanding of the child’s socio-cultural background and the role of mother in the family may be an important pillar for building trustful relationships between practitioners and parents.

This post refers to the role of mother as perceived by Polish contemporary women of socially and economically disadvantaged background.

Motherhood in the shadow of the myth of the Polish Mother

The Polish Mother archetype identified with the “good mother” pattern is apparent in both everyday and scientific discourse. It is widely recognized and shared by people growing in Polish socio-cultural context. The sources of the myth can be traced in folk and noble culture, values arising from the Catholic religion, traditionalism or history [1]. The figure of the Polish Mother, inscribed in the martyrdom of the Polish nation, takes on a symbolic meaning, provides a model for positively valorized motherhood practices, and strongly influences the identity of ordinary women who are mothers.

Research on the identity of mothers from Poland

A team of researchers from Poland conducted 16 narrative interviews with mothers with low-income background, as part of the international ISOTIS project [2]. Analyzing women’s stories through the prism of their identities, they found that women most often described themselves referring to the term “a mother”, followed by “a woman”, “a human”, and “a wife”.

Women characterized themselves through:

What does it really mean to be a Polish mother?

Women participating in the research more or less consciously entered the Polish Mother archetype. Their narratives focused on family life are an example of a “home matriarch” [3]. The power they possess closes within the framework of the household and the family, while its maintenance is associated with huge amounts of work and time devoted, sacrifices and exhaustion. Reconstruction of maternal experiences provides knowledge about the practices of implementing the mother’s social role, while showing what women feel socially obliged to do. 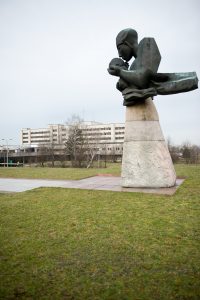 Segregation of the duties

Devoting herself to her loved ones

Convinced of her irreplaceable competences

Acting as a family life manager

The myth of the Polish Mother shared by successive generations of women strengthens tradition and validates certain values, sets a pattern worth imitating, indicates obligations and sets the limits of desired behaviour, describes and explains reality, facilitates its interpretation, and gives meaning to actions, while also affecting the identity of mothers. In the case of some women, a specific (patriarchal) social order imposed in this way, universally recognized, legitimate and universal, raises resistance, and also is associated with suffering. The need to change the status quo pushes mothers to look for different symbolic references and causes a reevaluation of their lives. Emancipation practices are not always associated with a revolutionary change in the way mothers play the role, but their purpose is to empower women.

The article is based on the presentation from the Equality & Inclusion Conference November 29th 2019, in Utrecht

Please follow and like us:
Motherhood in the shadow of the myth of the Polish Mother
Tagged on: motherhood    mothers    Parent involvement    parental roles