When will it be the holidays? When will I visit grandma? How long do we have to wait? Talking to toddlers about the intervals between different events is not an easy matter. It seems that the category of time and orientation are beyond the capabilities of the youngest children. But the results of research in this area may surprise you! 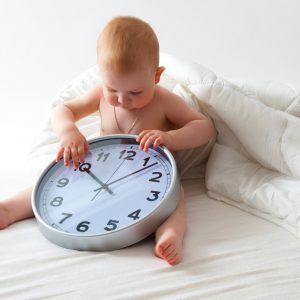 As early as the first month of life, the baby develops a primitive sense of time. In most babies, a regulation of the time of naps or meals is noticeable. With age, nocturnal sleep episodes also even out and become longer. In a 1972 study, researchers placed one-month- old infants in a dark room where the light was turned on every 20 seconds. When they repeated the experiment without turning on the light, they found that the babies’ pupils continued to constrict every 20 seconds in anticipation of the light change. Babies’ brains, the authors concluded, are ready to recognise “a specific time interval between two events” soon after birth [1].

During the first year of life, children’s sense of time becomes increasingly precise. Children between the ages of six and ten months can distinguish time intervals in both auditory and visual modes [2]. In a 2010 study, infants were shown an object at two-second intervals. After a while, the researchers changed the pace and showed the babies the same object at four-second intervals. The researchers noticed an increase in the infants’ gaze time after changing the time interval, suggesting that they could recognise the difference between two and four seconds. Interestingly, however, although infants can distinguish between two and four seconds (a ratio of 1:2), studies have shown that the same cannot be said for a time ratio of 2:3 (a difference of, say, 10 seconds and 15 seconds). This ability emerges much later [3].

When will that snack be?

Human brains are equipped to recognise time. However, this skill takes years to develop and it is not a linear process. Researchers have noted that at around the age of 3, children begin to make errors in their judgments of time, assuming, for example, that bright lights take longer to shine. So why, after a period of such rapid development of competence in this area, does a child’s sense of time suddenly seem to fail to develop? Some researchers believe that it is because children at this age are moving from implicit judgements of time (like predicting an upcoming stimulus) to explicit ones (estimating the duration of events). 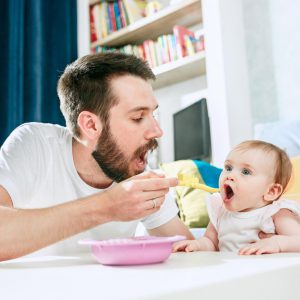 For example, if I put a fruit snack in a three-year-old’s mouth every five seconds, he would easily start anticipating fruit snacks at five-second intervals. He would also no doubt notice a situation where it took me longer than five seconds to feed him. But if I asked it to “wait two minutes” before I opened another box of fruit snacks, it would probably not be able to estimate how long “two minutes” really takes. The researchers – based on both a neurobiological model of the internal clock and the results of imaging studies in adults – say this is because explicit judgements of the passage of time rely on neuronal pathways in the brain that have not yet been developed in children. Such a clear sense of time usually develops around the age of 7 or 8 years [4].

How can we help the youngest children to be more aware of time?