Sophie does not want to put on her jacket and shoes to go out to the playground. She is walking around the cloakroom complaining. The teacher tries to talk to Sophie, but it only makes the girl angry. She is unhappy and nervous. It is not the first time this has happened. When Sophie’s dad comes to the nursery to pick up his daughter, the teacher decides to inform him about the difficulties she’s experiencing with Sophie. As she heads towards the cloakroom, she notices that Sophie is quietly sitting on a bench, and her dad is tying her shoes.

Sophie got … a smartphone.

Tablets and smartphones seem to be great gadgets that make it easy for adults to keep children busy and quiet. They are treated as a salutary solution, especially by parents who need time for more urgent matters than reacting to – sometimes intricately expressed – children’s needs.

Tablets, smartphones, and television can also be a great bribe tool – parents use them to calm a child, keep her still in a car or in a pushchair, or even provoke a longer session on … a potty. 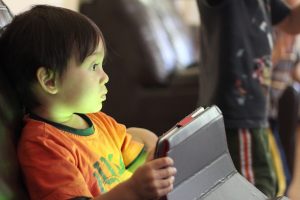 Teachers in nurseries and kindergartens notice the effects of excessive use of smartphones or tablets by very young children. Toddlers demand this type of items during the day and are not interested in the surrounding reality, or try to use toys as if they were phones. Many parents who are caring and have good intentions are not aware of the developmental harm done to their children by exposure to the screens of smartphones or tablets (Kaiser Family Foundation 2003).

Why is it harmful?

Certainly, in the modern, digitized world, you cannot isolate children from new technologies, but it is important to prepare children to use them responsibly. The American Academy of Pediatrics (AAP 1999) recommends that children below the age of 2 do not generally use phones or tablets, and even have a time limit for watching TV. For children between 2 and 5 years of age, the recommended standard of electronic media use is a maximum of one hour per day, with active participation of an adult. Why?

The reasons given by the AAP include:

Research carried out by Sheri Madigan with her team (2019) showed a relationship between the time spent by young children in front of the television, computer or tablet screens and their performance on developmental screening tests. The study involved 2441 children aged 24 and 36 months. Infants and toddlers learn better when handling materials which they can touch or manipulate and which help them learn in a multi-sensory way. Contact with screens does not give them such opportunities. What’s more, toddlers learn best by interacting with human beings rather than with monitors. Sitting with their heads down and having no eye contact with people can even be detrimental to the development of their brains! (Lagercrantz 2015).

Watching TV, using a smartphone or a tablet significantly affect the capacity for sensory processing in children. The faster the sensory information changes, the sooner the brain has to process it to keep up with what is going on. If the pace required by external factors is so fast that it exceeds the threshold of our capabilities, we experience sensory overload.

Most adults certainly know such a feeling when, for example, trying to finish the presentation for a client, the younger child screams for no reason, the dog requires walking, the older child tugs on our shirt-sleeve and complains to be hungry and the phone is ringing… Too much to be processed, our nervous system is overloaded, and we feel like running or shouting, our head or stomach hurts, the body is tense, and sometimes we panic.

Children – spending time looking at the screen – are exposed to constant changes in visual and auditory stimuli, which have to be quickly processed by their brain. However, these changes often do not lead to sensory overload being felt immediately. The child can keep up with processing them, but her brain works super-fast to do it. Her brain is downright hyperactive to handle all the incoming information. Then it is dinner time, bath time, or the child goes to the nursery, where there is no phone or tablet and everything is much slower. Then the pandemonium begins! 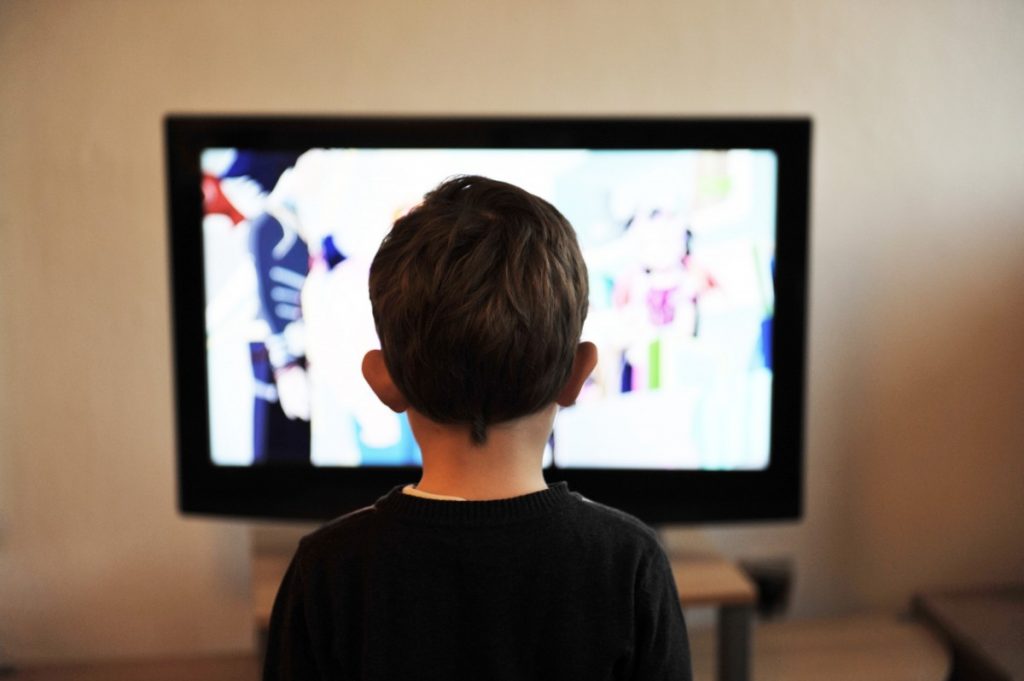 If earlier the child seemed super focused, even “absorbed by the screen”, she is now super-un-focused. Yes, she’s still … super, because she’s just having a super-terrible mood.

The child’s brain, processing visual-auditory stimuli, worked in a super-fast mode and suddenly there are no stimuli. There is nothing to process, but the brain is still in the super-fast mode. Until it adapts to real life and normal pace (which takes time), the child will be restless, overly aroused, and even terrified at the sudden lack of stimulation. Unknowingly, the child will provoke her surroundings to provide strong stimuli, which will significantly impede the process of establishing and keeping relations. A toddler can shout loudly, do a lot of motor activities, throw objects, destroy things, run around nervously, get angry quickly… This can have long-term consequences!

Researchers emphasize that brain development in infancy requires the child and her social environment to be involved in a variety of activities aimed at establishing relations (Ravicz et al., 2015). Investigating the development of social brain functions in children, Grossmann (2015) said that the newborn is focused on the social environment and prepared to interact with it, as she clearly prefers faces to other visual stimuli and a human voice rather than other auditory stimuli. The children that were examined were most responsive to human faces and voices, actively looking for these stimuli in their environment. The spoken language addressed to them caused the activation of the medial prefrontal cortex, which helps plan movements and actions, and also inhibits spontaneous and violent emotional states, whose source is the hypothalamus and the limbic system.

Direct contact with the child and speaking to her positively affects the regulation of emotions, while the lack of such experiences may result in overexcitability and the inability to function adaptively. For proper development, young kids need face-to-face contacts, in which an adult comments on their activities, names actions and objects in their immediate surroundings. Children should not handle devices when they are in situations requiring interaction, being present and vigilant – during a walk, on a playground, or in a nursery cloakroom, etc.

If a toddler is already using smartphones or tablets, then it should be a time for interaction between the child and the carer – it is a good idea to comment on what can be seen on the screen, what is happening in the application. Play with the child for a change, exchange ideas (Chiong & Shuler 2010). A smartphone or tablet should not function as a soother, as the early and excessive contact of a child with this type of devices may negatively affect not only the child’s physical or cognitive development, but also – and above all – her social and emotional development.

Please follow and like us:
Instead of a soother? – on new technologies in the lives of toddlers
Tagged on: home environment    Parent involvement    screen time    smartphones    Socio-emotional development    Toddlers