During the first year of a child’s life, it builds a primary bond with the closest family members (usually mother and father). Relationship with a close adult gives children a sense of security, enables them to engage in new tasks and undertake risks. This means that in order for a child to be able to open up to social contacts and new people, he or she must be in the right conditions and time to build a secondary bond – an attachment to a caregiver. 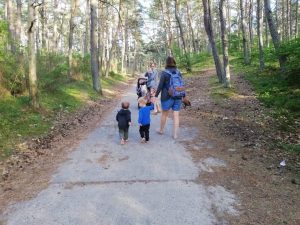 It is impossible to predict in advance how long it will take for a particular child to adapt to an ECEC setting. On average, it takes about 2 weeks. But it may be that the child will wave ‘bye-bye’ to her/his mother on the third day and willingly stay in the group. It may also be that after three weeks the child will need to be accompanied by a parent. It depends on the child’s temperament, his or her experience with new situations, the type of relationship with the parent, the sensitivity and competence of the caregivers and the group of children in which he or she is a part of. [1,2].

A lot of parents and caregivers share a ‘folk belief’ that at the beginning of the stay at the setting, the child will cry, then stop and somehow get used to a new context. That crying is a “normal” thing. Such adaptation does not benefit children, it causes a lot of stress in many of them, it is also difficult for caregivers  and parents whose anxiety often contributes to the stress of the child.

How can all parties – parents, caregivers and children – go through the adaptation process  gently?

What does research say?

Research shows [3] that children in the adaptation period for 2-3 weeks are more irritable than normally and their general mood is worse (the level of cortisol – a stress hormone – is higher), so the presence of parents is very important for them [4]. Older children (those over the age of one year) experience stress longer, protest more, especially in the second week of adaptation, when the curiosity about the new passes, and they are particularly sensitive to the way in which adaptation takes place. Leaving a child in a crèche for a long time from the very beginning (in the study pointed out to a stay of more than 4 hours from day one) causes not only a significant deterioration of its’ mood, but also affects the quality of his relationship with the mother – there is a limited sense of security. The mild adaptation of children to a crèche (i.e. short stays – initially for 2-3 hours a day) did not result in a weakening of the safe bond between the children and their mothers, although they were also associated with powerful mood fluctuations.

Another study [5] carried out with 70 children aged 11–20 months showed that cortisol levels increased significantly in children with sudden/early separation from their mothers (75% to 100% higher than at home) and remained at a balanced level (although also higher than at home) when mothers spent time with the child in a crèche, i.e. when the adaptation phase before separation was longer.

The process of separation includes not only physical absence, but also a sense of loneliness. It is normal for children to feel uncomfortable and stressed as they separate from their loved ones. Research shows that in the first and sometimes second week of separation, stress levels are high enough to show signs of stress during the day (the highest value is about an hour after the separation) [6]. In addition, children have the strongest reaction to separation at the first stage (in the first days). Over the time, stress gradually decreases and stabilizes around the 4th week of adaptation. Remember, however, that stress is not only sadness or loss – it is also excitement, joy and new challenges.

Signs of dissatisfaction with the parent’s departure are rather common. Research shows that even children with a “strong personality”, with a safe bond (attachment)  with their parents and a bond with their caregiver, and interested in what is proposed by the institution, often get frustrated in the first week of separation [5]. But with time, however, the feeling of discomfort passes. 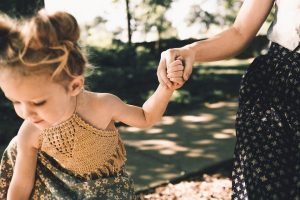 Adaptation is a process that usually lasts about  10 days (but its length should always be adapted to the child’s needs!), and consists of several stages that can be labelled “The first meeting”, “Trust” and “Entrustment” [6].

At this stage, the child learns about the new environment (e.g. space, people, sounds, smells, habits, tastes), parents get to know the facility and its functioning, caregivers  get to know the child and the parents. Here are some practical tips on how to implement this stage smoothly:

Children and parents, building on positive initial experiences (the first phase), begin to feel safe in the facility. Children gain trust in their caregivers , are ready to play , receive help and, as a result, establish a safe relationship with them.

8 tips on supporting the relationship between the caregiver and the child:

Entrustment involves separation from the closest parent(s). Only in this phase will the child be ready to stay in the institution without the presence of the parents – first for a short period of time, then for a longer period.

How can parents help their child get used to being in the crèche on their own? They can do the following:

Educators can help parents who find parting with the child difficult, for example by sending a text message with information about how the child is playing. After all, giving a child to someone, even if trust already exists, is a very difficult situation.

We can conclude that the child has adapted when, among other things, he/she:

This post is based on 2 blog messages written by Monika Rościszewska-Woźniak:

Please follow and like us:
Everybody ready? Three steps to successful adaptation to the nursery
Tagged on: adaptation