Two-year-old Stefania refuses to put on her new shoes. She is definitely calling out: not mine! And she escapes to the farthest corner of the classroom. She is screaming, crying, stamping her legs. The teacher tries to get closer to the girl. Stefania pulls out her hands as if she wanted to hug herself, but at the same time, she is overwhelmed by despair and pushes the teacher back. The girl’s favourite shoes got too small and her mum brought new ones to the centre. It seems that nothing can be done…

Usually between the ages of 2 and 3, children realize that they are separate people. This is when the need arises to clearly communicate their preferences and aversions and to act independently of their parents or caregivers. Two-year-olds want exactly what they want, when they want it. Therefore, a loud “no” and a firm “self” can often be heard from them. At the same time, the emotional life of two-year-olds is extremely complex. They begin to experience a wide range of feelings such as pride, shame, guilt, embarrassment. Their developing emotionality causes rapid changes of feelings, with high intensity of emotions. They can be very joyful when they get a snack to immediately despair loudly when a drop of yogurt drips on their blouse. Sometimes they experience anger so much that they can throw toys, scream, kick, bite or hit objects.

It is also not easy to satisfy them with a substitute – if their favourite, purple shoes are gone, they can be truly unhappy. Toddlers experience strong frustration when they cannot get what they want. And because they have a relatively small amount of words and are not always able to clearly express what they need, contact with them can be difficult, which causes another wave of emotions. That is why a two-year-old is faced with an important life task – how to regulate his or her own emotions and what to do if they cannot be kept inside?

How does self-control develop?

Self-control develops in stages. The earliest indicator starts to be visible at 10 months of age when the child becomes able to focus [1]. Infants who can focus their eyesight for a longer period of time show better self-control in later life.

At the time of their first birthday, babies show the first signs of cognitive flexibility and are able to adapt their behaviour to the prevailing conditions to some extent. Between the second and third years of age, children become able to stop doing something on command – at least for a while. Impulse control and planning of their actions requiring cognitive effort develops quickly until the age of 4 and then slows down until the age of 7. 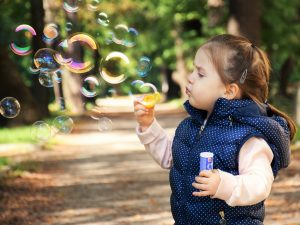 Self-control continues to develop through childhood and teenage age until adulthood. However, self-control of emotions in early childhood is one of the most dynamically exercised competences [2]. Throughout childhood there is a transition from external control, by adults, to autonomous regulation of one’s emotions. The ability to control emotions manifests itself in the ability to refrain from certain behaviours and to direct behaviour in a targeted manner. In the studies presented by Czub [2], children, who almost always managed to calm down within approximately a dozen minutes, were characterized by a higher socialization than children who had difficulties to do so, which was also associated with a lower risk of developmental difficulties.

Another study that shows the role of self-control in the child’s development was the famous experiment with marshmallow foams. Its author is an American psychologist Walter Mischel. The experiment concerned research on delayed gratification and was carried out in several series spread over the years – throughout the entire decade of the 1960s to the early 1970s. Children were asked to sit in a room without any distractions such as toys or music. Researchers could observe the behaviour of the children through a one-way mirror. Marshmallow was placed on the table in front of the child. The assistant informed that she was leaving the room for fifteen minutes and if the child did not eat the delicacy during this time, he/she would receive a second one as a reward.

The video shows how children behaved during the experiment.

Only one third of the participating children were able to resist the temptation to eat a marshmallow. The remaining children were unable to cope with the task and ate the treat before the return of the examined person. Many years later Mischel, together with his team, conducted another study, finding the children participating in the experiment. The first follow-up study was conducted 28 years after the famous experiment. At that time, it was shown that children who were able to refuse to eat the treat achieved better results in university [3].

These findings were confirmed by a New Zealand study carried out by the Multidisciplinary Centre Dunedin Health and Development Study. It has been shown that childhood self-control is more important than socio-economic status or the child’s intelligence in predicting physical health, wealth, life satisfaction or tendency to addiction and crime in adults. Researchers followed 1037 children from birth to the age of 32. The study enabled broad observations of development, including changes in health and behaviour. Children who had a higher level of self-control in early childhood, showed less health problems in adulthood, earned more and were less frequently addicted or convicted to crime. These discoveries became the basis for the efforts to provide high quality early education and care [4].

How to help children to practise self-control?

The ability to manage emotions is important for the child’s development. It should therefore be supported. When you see difficult behaviour, it usually means that the child cannot express his or her feelings in an acceptable way or does not know how to satisfy his or her important need. Learning to cope with strong feelings occurs naturally and goes hand in hand with the development of language and social skills. However, young children need guidance on how to deal with strong feelings such as anger, sadness and frustration. When a child is really angry, name what they are experiencing: “You are really angry now because you cannot play with the red car”. Then suggest how you can deal with such strong anger. There are various strategies to consider: jumping up and down, hitting the pillows, tearing the paper, hugging the caregiver strongly, painting anger, scribbling on the sheet of paper and crushing it, or other strategies that the teacher considers appropriate at the time. It is important to show the child that there are many possibilities to express their feelings in a way that is harmless to them and their environment.

After a long hesitation, Stefania decided to hug the teacher. It took a while before she calmed down. All the time she refused to wear the new shoes. Her choice was respected, and she was not wearing shoes that day, just her beautiful new socks.

Please follow and like us:
About intense emotions and self-control in small children
Tagged on: emotional development    emotions    Infants    self-control    Toddlers